Third installment of a mini-series about LED technology by Angela Fedele, an industry journalist for Sourceable.

Organic LEDs (OLEDs) are light emitting panels made from organic carbon based materials that emit light when electricity is applied.

OLEDs have been used in television and mobile phone industry for years but have not been very popular in the lighting industry until recently. With its flexibility and glowing surface, OLEDs have captured the attention of some Lighting Manufacturers and Designers and could open a whole new world of luminaire design and applications.

Link to the article: 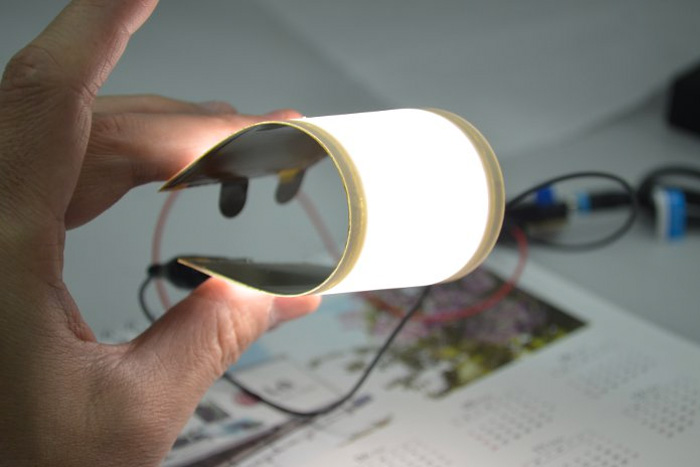 With LEDs at the forefront of energy efficient lighting trends, it was only a matter of time before their organic counterparts gained momentum.

Organic Light Emitting Diodes (OLEDs) are already being used in television sets and in automobile taillights, but they are gaining more traction as they are light, flexible and provide warm and even illumination.

“Within the same LED family, Organic LED, which are light emitting panels made from organic carbon based materials that emit light when electricity is applied seem to have received some attention from the lighting industry lately,” said Kevin Dinh, a partner at Light Box Studio. “The technology has been popular in the TV and handheld device industry but not so much in lighting.”

“As OLED panels can be made flexible or transparent, they can open a whole new world of luminary design and applications to be seen in the new future.”

While there are not extensive differences between LED lights and OLEDs, the latter come are built as extremely thin and small panels, which makes them more versatile.

Phillips has conducted research that reveals how electricity passes through the one or more organic semi-conductive layers in OLEDs.

“These layers are sandwiched between a negatively charged layer of aluminium, and a positively charged, transparent layer of indium tin oxide,” Phillips’ website reads.

“The whole ‘sandwich’ is attached to a sheet of glass or other transparent material, known as a ‘substrate.’ When current is applied to the aluminium layer, it is conducted to the positive layer through the organic film. As the current passes through the film, the film emits light. Different materials in the films emit different colour light.”

LG Chem’s table lamp is the first product of its kind to utilise a curved OLED panel as a light source, with the panel but a millimetre thick. It provides no glare or shadow and, unlike LEDs, produces very little heat (below 35 degrees Celsius).

It can be remotely controlled with a compatible smartphone or tablet using the LG lighting control app. The light can last up to 40,000 hours, with LG hoping to increase this to 60,000 hours by 2016.

This year, Australian designer Andy Zhou unveiled her OLED Plus Pendant, a luminary  that combines a series of flexible OLED panels that move to create illumination that ranges from an area light to a spotlight. This is enabled through the use of magnets and tensile wiring mechanisms, and is designed to demonstrate the capability of the technology.

OLED Application in a retail environment

“It uses 36 rigid OLED panels to emulate future capabilities of organic technology such as its razor thin profile and flexibility,” Zhou says on her website.

The project was supported by Australia’s national research agency CSIRO and was constructed with environmental ethics in mind.

Timber components that make up the suspended column of the light are from “century-old recycled timber” sourced from the original Princes Pier in Port Melbourne, Australia, while Zhou notes “the fabric cover is manufactured by a process called 3D CNC Knitting…This process uses white polyester and grey wool thread to create a seamless textile in a single piece.”

OLED lighting could be the next big thing in energy efficient lighting. This makes for an exciting prospect for architects and designers seeking a more flexible application for their luminaries and small installation spaces.